Valor’s Webinar Series with the IDB, IFC, and Temasek 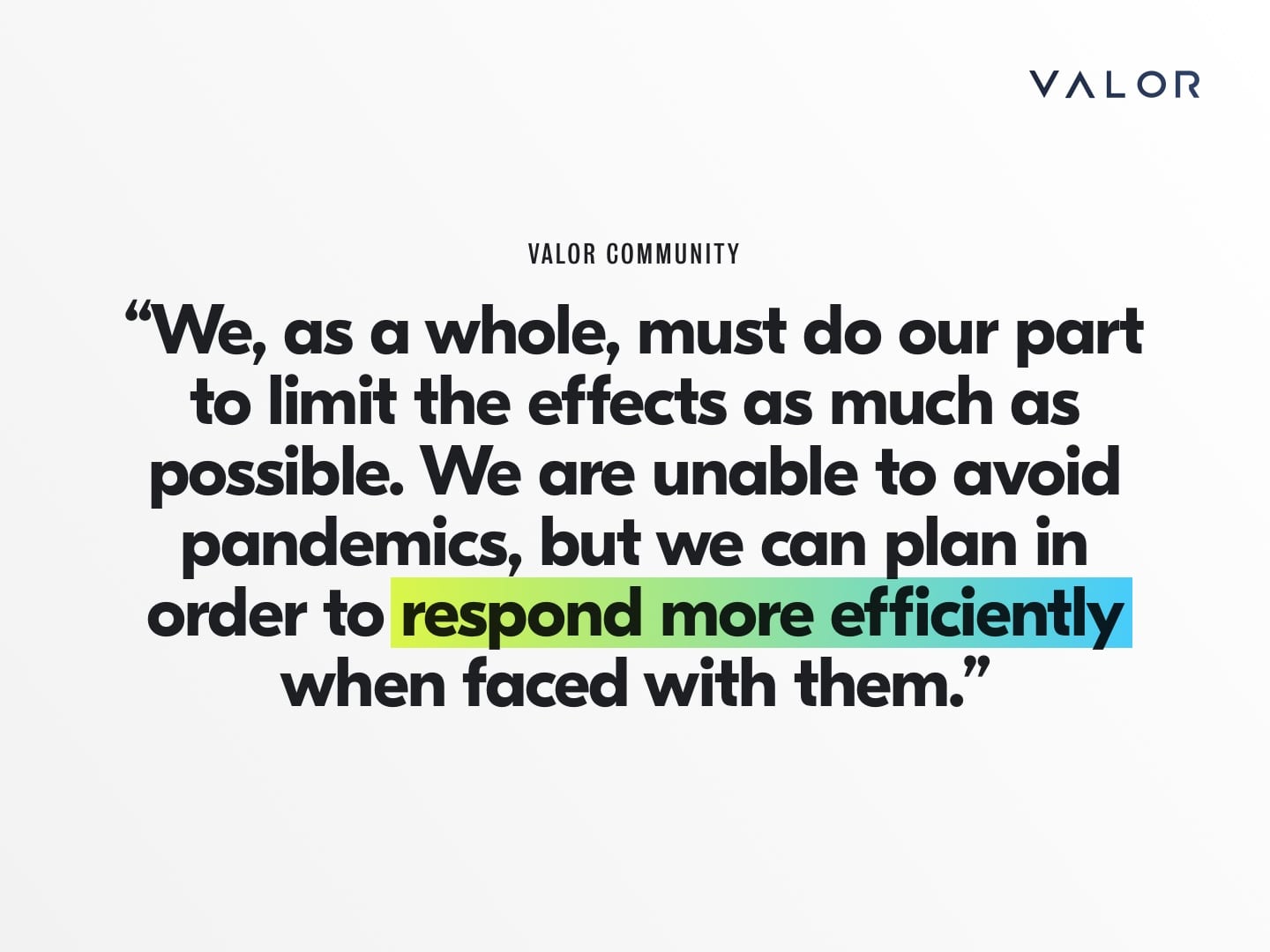 “Pandemics happen. They are a biological fact.”  This was the opening of Mike Leavitt’s speech during the “COVID-19: Assessing the Impacts of the Global Health Crisis” webinar, held by Valor Capital Group. Clifford Sobel, former US ambassador in Brazil, mediated the conversation between Mike Leavitt, former Governor of Utah and Secretary of Health and Human Services, Frances Townsend, former Deputy Assistant to President Bush, and Raymond Chambers, World Health Organization (WHO) Ambassador for Global Strategy.

Leavitt quotes historical facts to prove that this is not the first pandemic the world has faced – and definitely not its last. There are records of a similar occurrence in 400 B.C. and more recent ones, such as the Bubonic Plague, which lasted six years and killed over a third of the European population in the 14th century. It changed the economy, politics, and the way people related to each other.

Resilience will be essential in the post-COVID-19 world. Although humanity has gone through several pandemics, we have not yet learned to avoid their devastating effects, like those seen now.  This is something which will require a concerted and unified global effort. Governments must build pandemic emergency plans, but so must businesses and families. We, as a whole, must do our part to limit the effects as much as possible. We are unable to avoid pandemics, but we can plan in order to respond more efficiently when faced with them.

What have we learned so far?

In order to be resilient, we must understand what has worked and what needs improvement. Social distancing has proven to slow the spread of the virus but has proven to be a controversial subject because of its serious impact to the economy. “What people fail to understand is that without social distancing, the number of fatalities would be much higher, what, in the long term, would bring much worse effects on the economy than the ones we have seen now”, says Frances Townsend.

Townsend goes even further, defending the idea that restrictions should always include everyone in the society. At the beginning of the pandemic, there were several projects that aimed to restrict the circulation of people in high risk groups, such as the elderly and people with comorbidities, letting the youngest ones keep their normal routines. Over time, however, we have observed that COVID-19 does not follow a pattern, and that it is somewhat democratic: victimizing people of all profiles. Using New York as an example, Frances explained that, at that time, a third of the people hospitalized were  between 18 and 50 years old, mostly without comorbidities.

Another good strategy is to restrict people from International locations from entering the country. For Frances, the decision of not allowing people coming from China and South Korea to enter the United States at the beginning of the pandemic gave them time to better prepare for what would come.

For Raymond Chambers, that strategy is also helpful because it allows governments to allocate resources where they are most needed. This is possible because quarantines prevent the spread of viruses, which will then be concentrated in specific regions, or hot spots, as was the case in New York.  As a result, less affected locations can direct their resources to help them.

We have been dealing with Influenza (H1N1) for over a century and the medical community is still trying to approximate which mutations will present each year, despite the evolution of healthcare. This is proof of how persistent and dangerous a virus can be.

For Leavitt, COVID-19 has shown to be one of the greatest enemies faced by humankind. He says that not only its dissemination is highly effective, but once someone gets infected, they don’t have symptoms until much later, which makes its transmission and spread harder to control.