Why Brazil? Brazil is the Beta Market of the World

Boasting a population of more than 210 million people and the world’s 9th largest economy, Brazil has long been a focus of emerging markets investments, ever since it was anointed as a member of the “BRIC” countries by Goldman Sachs in 2001. The country has experienced its fare share of highs and lows, from the The Economist’s 2009 proclamation that Brazil was finally “taking off” with strong growth unphased by the global financial crisis to the fallout from President Dilma Rouseff’s impeachment and the Lava Jato corruption scandal that exacerbated the country’s commodity-price driven recession in 2015 and 2016. Despite these ups and downs, one constant has persisted through turbulent times: Brazil’s technology ecosystem has presented an exponential growth trajectory supported by the country’s growing, internet-savvy middle class and hyper-urban population. These factors, in the context of a country with continental dimensions and incipient digitalization across industries, create attractive opportunities for technology investment.

Brazil represents a breeding ground for entrepreneurs with innovative technologies and business models to “test the waters.” The market is large enough on its own to support unicorn-sized businesses while allowing clear expansion paths for successful startups to both emerging and developed markets alike. 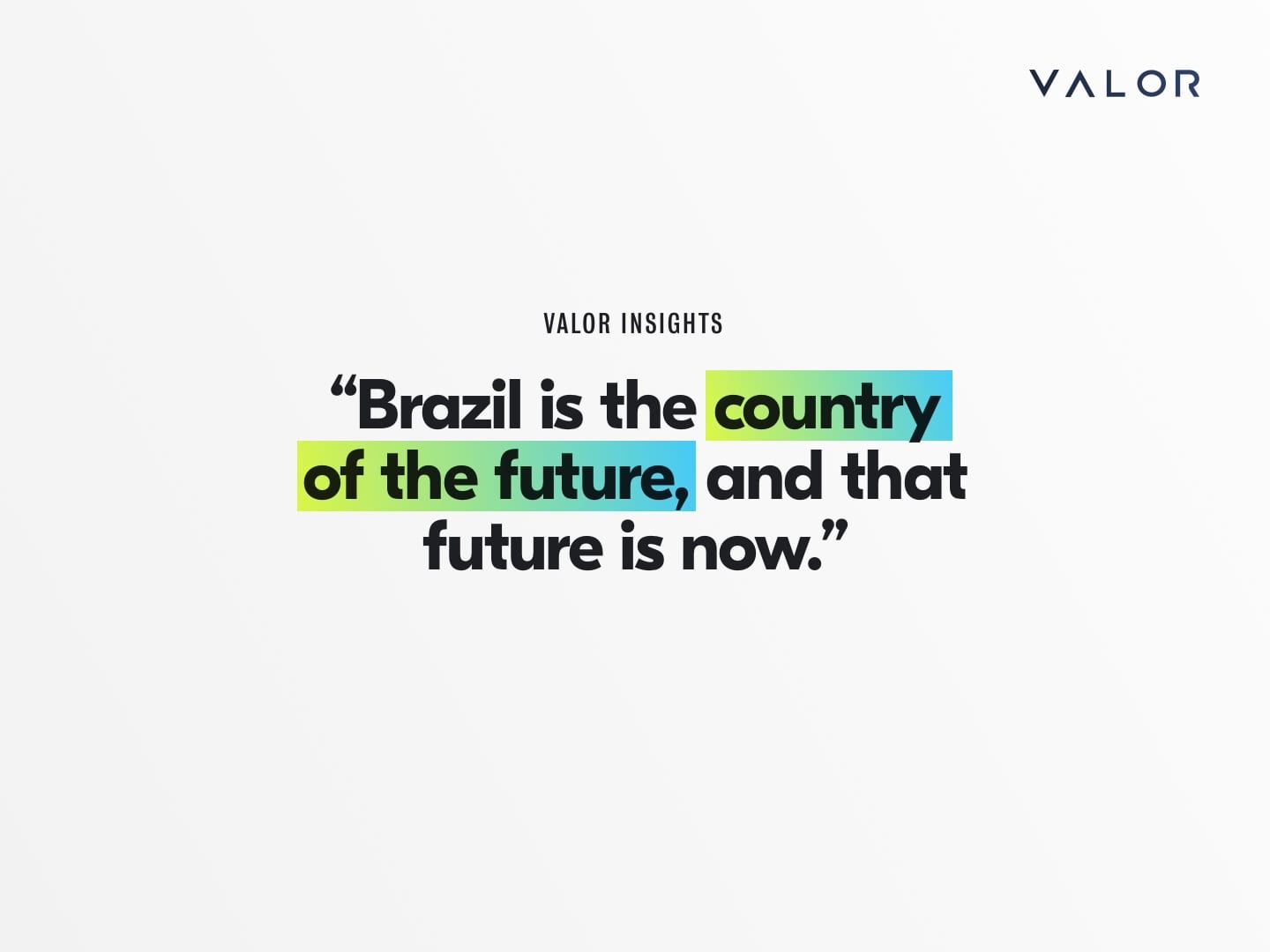 The World’s Most Digitally Engaged Population

By many measures, Brazil is one of the most connected and engaged digital markets in the world. The country represents the fifth-largest internet and mobile economy in the world, with more unique mobile connections (236 million) than people (212 million). Further, according to McKinsey & Co., Brazilians on average spend 9 hours a day connected to internet-enabled devices (versus 6 hours per person per day in the US) and rank 2nd or 3rd in per capita usage of many social media platforms (Facebook, Instagram, WhatsApp, YouTube, Netflix, and Pinterest) oftentimes with the highest levels of engagement in the world. Nonetheless, despite its large mobile installed base, Brazil still lags the US on ownership of key internet-connected devices on a penetration basis: 71% vs. 78% for smartphones, 38% vs. 77% for laptops/desktops, and 15% vs. 46% for tablets. Moreover, the US outpaces Brazil on digital ad spend per capita (12x) and e-commerce retail penetration (12% vs. 6%). Undoubtedly, the initial conditions of size, connectivity, and engagement combined with organic whitespace gaps positions Brazil as a fertile ground for venture-backed startups.

For decades, Brazil’s economic potential has been restrained by the bureaucratic inefficiencies that seem to pervade all industries in the country. Even as recently as 2019, the World Bank ranked Brazil as 124 out of 190 countries in “ease of doing business”, driven by red tape for company incorporation, long waits for patent and permit applications, and an unnecessarily complex corporate tax system (>1,500 hours to file taxes in Brazil, compared to 175 hours in the US and 241 hours in Mexico). Furthermore, Brazil’s economic growth story of the past several decades has been largely driven by demographic factors, with labor productivity stagnating despite major advances in average education attained per adult. Technology-enabled businesses are uniquely positioned to capitalize on these Brazilian challenges to create financial and social value for all stakeholders. The country’s most successful startups have attacked structural inefficiencies that have long plagued major industries: payments (StoneCo, >$9 billion market cap), consumer banking (NuBank, $10 billion valuation), real estate transactions (Loft, $1 billion valuation), and logistics (CargoX, high performer), just to name a few. As increasing entrepreneurial talent and investment enter the market, large, digitally underpenetrated industries from education to healthcare will produce more large-scale startup success stories.

With Brazil at the forefront, Latin America is increasingly viewed as an attractive region for venture opportunities. According to LAVCA (Latin American Venture Capital Association), venture capital investment in the region has doubled every year since 2016, reaching a record $4.6 billion in 2019, of which Brazil accounted for over 55% ($2.5 billion in 2019, nearly doubling from $1.3 billion in 2018). This inflection point has been supported in large part by Brazil’s cultural and generational shift in risk tolerance towards accepting entrepreneurship and startups as viable career paths; while traditional corporate roles and civil service have historically appealed to Brazil’s top talent, startups are increasingly attracting the country’s brightest minds, with top startup compensation increasingly competitive with large corporates. This convergence of financial and human capital in Brazil has created an internationally competitive startup ecosystem that by the end of 2019 had produced 13 unicorns, one more than Germany and behind only the US, China, UK, and India. Concurrently, startups born in Brazil are increasingly gaining first-mover status globally as local problems in the country’s complex, fragmented, and inefficient “old economy” generate innovations that are resonating in markets around the world (i.e. Gympass, Inloco, Pipefy, Worthix, amongst others). Additionally, the cultural proximity between Brazil and the US makes consumer and enterprise internet applications cross borders organically and with high velocity. The Brazilian technology ecosystem has also shown remarkable resilience amidst macroeconomic volatility: while the aggregate valuation of the country’s top ten non-technology companies decreased by 37% from 2010 to 2019, that of the country’s top ten technology companies increased by 219%. This confluence of talent, funding, and growing track-record will continue to drive the growth of Brazil’s entrepreneurial ecosystem for many years to come.

Brazil: The Country of the Future… and the Future is Now

An old aphorism says that “Brazil is the country of the future…and it always will be.” While macroeconomic and political history suggest this may be true, from the lens of a venture capitalist the reality is that Brazil is the country of the future, and that future is now. While the transformation of Brazil’s startup landscape during the past decade has been truly remarkable, this progress is just the beginning. In 2019, venture capital investment as a share of GDP reached 0.12% in Brazil, versus 0.33% in China and 0.60% in the US, suggesting plenty of room to grow. From the perspective of market-dominant companies, the untapped Brazilian opportunity is even more tangible. At the end of 2019, all of the top five companies in the US by market cap were technology businesses whose aggregate value represented 23% of GDP. In China, at the end of 2019 three of the top five market cap companies were technology businesses (up from zero in 2010) whose aggregate value represented 9% of GDP.

As for Brazil? Unfortunately, at the end of 2019 Brazil’s most successful technology businesses still did not count among the country’s most valuable companies. The largest enterprises in Brazil and Latin America continue to be legacy players in natural resources, banking, telecommunications, retail, and CPGs. However, the inevitability of technological progress that has forged a path of creative disruption across global markets is beginning to accelerate both in the region as a whole and in Brazil. In Q2 2020, Argentine e-commerce giant Mercado Libre (NASDAQ: MELI) broke the glass ceiling and entered the ranks as one of the top ten most valuable companies in Latin America, and payments fintech Stone (NASDAQ: STNE), an early Valor investment, is solidifying itself among Brazil’s most valuable businesses. In the coming decades, for all of the aforementioned reasons and more, we firmly believe that the Brazilian industrial paradigm will be fundamentally changed by the power of technology. Innovative “new economy” businesses will surpass “old economy” behemoths to dominate the country’s economic landscape. We have high conviction that Brazil will converge with the US, China, and other leaders to become a technology powerhouse and a future-forward hub of global innovation. Brazilian startups are already at the leading edge in massive markets such as financial services (4 unicorns: Stone, NuBank, PagSeguro, EBANX) and real estate (2 unicorns: Loft, QuintoAndar) and are primed to further disrupt enormous industries – through technology enabled business models – in which the country is a global leader, including agriculture, healthcare, and education. Alas, the myth of the “perpetual country of the future” shall finally crumble and Brazil will fulfill its destiny as a technology titan.

Awakening The Sleeping Giant: Why Brazil’s Tech Scene Is One To Watch