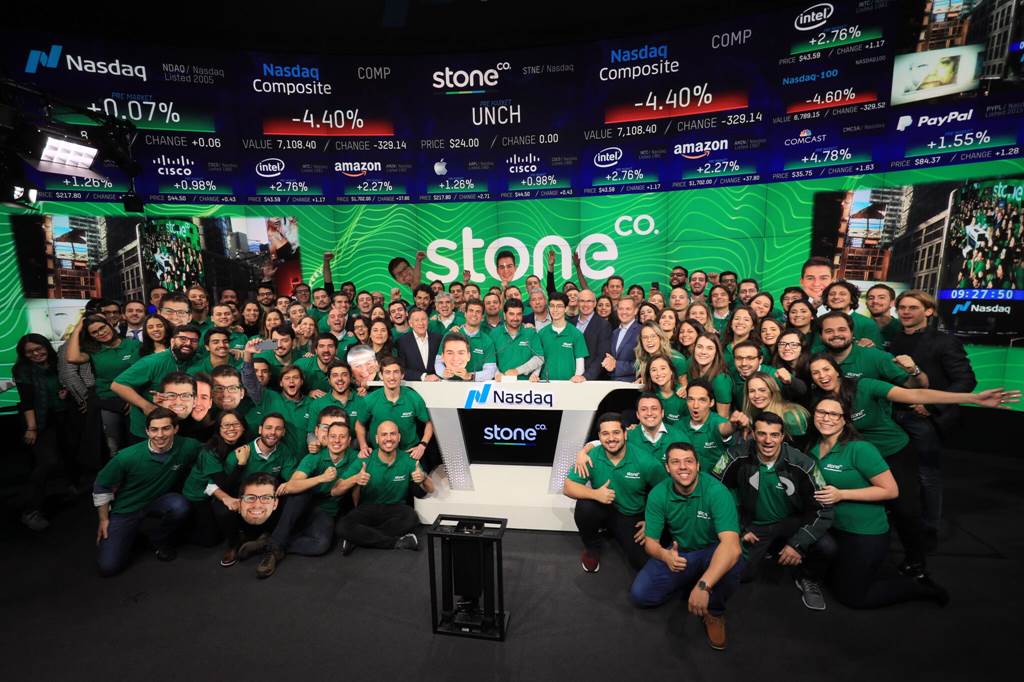 StoneCo is enabling the digital economy through payments

On October 25th  2018, André Street and the Stone team rang the iconic Nasdaq opening bell, marking the achievement of a highly coveted milestone celebrated by few Brazilian startups: an initial public offering in an international market. By the end of the day, the card payments processor had raised US$1.4 billion from investors and seen its stock soar by 30%, propelling it to a market cap of more than US$9 billion and transforming it into one of the largest global fintech IPOs in history. The company’s overperformance attracted a wide gamut of investors, including Berkshire Hathaway, led by Warren Buffet, and Ant Financial, Alibaba’s financial services arm. The event was especially meaningful for Valor and marked the beginning of a new phase in our long standing partnership with the company. Stone is, in many ways, the epitome of Valor’s investing and value creation approach, starting from relationship capital and transitioning to a full lifecycle investment all in the context of a cross-border strategy.

Stone was founded in 2012 to tackle the R$1.1 trillion Brazilian card payments market. Following the end of the exclusivity between card networks and merchant acquirers, André Street saw the opportunity to challenge Cielo and Rede, the slow-moving acquiring duopoly owned by the incumbent banks, by building Brazil’s first truly customer-centric card and electronic payments platform. Stone not only introduced a new product and customer experience mindset to the space, but also disrupted the incumbents’ sales strategy by creating a hub-and-spoke model that deployed a passionate salesforce of “Stone Warriors” throughout the country. Stone’s success was only possible with the company’s heavy focus on people and the internal culture-building approach implemented by André during the early days. The company currently boasts one of the highest NPS scores in the market and a motivated workforce of more than 3,000 employees pushing the “Green Wave” forward.

We had known André from his time at Braspagg, a venture-backed payments company that he founded in 2005 – the first of his many enterprises. Almost a decade later, Andre decided to eschew venture funding at the early stages of Stone’s operation, but he opened the doors to our partnership in the company’s Series B in 2014. Valor became the only venture capital fund to invest in Stone, and we doubled down on the Series C. Since our initial investment in 2014, the company had grown its client base from 7k to 495k merchants and its TPV from R$1.4B to R$129B at the end of 2019.

An important part of the rationale for the Nasdaq IPO was the opportunity to arbitrage the disparities between valuation multiples seen in Brazil and in the US, a key pillar of Valor’s investment strategy. The Nasdaq IPO allowed the company to not only attract a diverse set of high-profile long-term investors, but also enjoy a higher valuation conferred by savvy growth-focused technology investors in the American technology sector. In that sense, Stone’s public offering was both an indisputable confirmation of the company’s success and a strong validation of Valor’s pioneering cross-border strategy.

The payments acquiring and merchant solution space is white hot with opportunities in real-time payments, full-stack banking services, and receivables financing. The future is bright for Stone and the next wave of upstarts in the space!